Well, yesterday I realized I have turned a corner…

Actually, I slipped right through it is probably a more accurate reflection of my epiphany.

I was on my way to jury duty yesterday morning.  I had enjoyed the rain throughout the evening and into the morning.  I even saw a double rainbow on my way to the courthouse.  I was running on time (a rarity for me) and all was well with the world.  I strode confidently toward the courthouse, happy (unlike most) to perform my civic responsibility.

Maybe because all was so right with the world – maybe because the sun had peeped out from behind the clouds – maybe because I was people watching instead of sidewalk watching…but apparently the rain had caused a bit of a mud hole on the sidewalk I was traversing… and I missed it!   As soon as my foot hit it, there was no rescue.  I was down fast, down hard, and down with one leg in front and the other in back (something a natural man would be unable to do!)

In days gone by – my internal dialogue would have instantly kicked in!  “Oh God, fat man down on aisle 13!”  “Who saw that and what are they thinking?”  “Surely I look like a fat pig-hog rolling around in his mud pool….quick, someone grab the slop bucket!”

But as people gasped, offered helped, stared in awe at my not-so-natural flexibility – I merely said, “Oh, I’m fine – thank you for the help.  I just overlooked the mud.  No worries.”  And truly – that’s all I thought, too.   (Other than the fleeting thought of ‘How am I going to sit through jury duty covered in mud….I hope it doesn’t look like I pooped my pants…this will make a great Facebook post!)

I went to the restroom, cleaned up my clothes as best I could – and carried out my civic duty.  The crazy voices that have chained me to this weight-loss struggle were eerily silent.

Some days, the demons are dead.  Here’s hoping they stay that way!!

<Remember – Fat Tuesday will be moving to a new location in October!  Stay tuned!!> 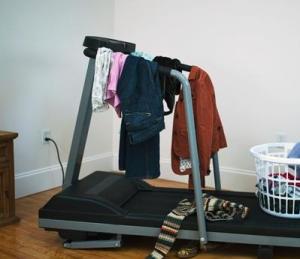 It’s a room of warriors.  Strong.  Vigilant.  And silent.

From the weights to the bands to the treadmill…they all stare silently, dreaming of activity.  Getting used to disappointment.

The best investment we make in exercise is NOT financial.  It’s also not the biggest sacrifice.

A commitment to sweat – to work hard – to get up early – to skip a favorite TV show – to decline dessert and run instead….those are the investments and sacrifices we make for a good work out.

And they scream GOOD JOB more than any piece of equipment sitting unused in the corner of your bedroom.